Which Version of Lightroom Are You Using?

In recent years Adobe has done a really good job of confusing everyone about its versions of Lightroom. Back in the old days we only had one current version at a time and they were named Lightroom 1, Lightroom 2, etc. This numbering strategy changed when Adobe moved most products to its subscription model, named Adobe Creative Cloud.

At the start of the Creative Cloud Lightroom was called Lightroom CC. Initially this change caused a bit of confusion over the final standalone version, Lightroom 6, and the subscription version. Even though the subscription version is a Creative Cloud product, the software installs on your desktop and all of your files stay there too. So it wasn’t a true cloud computing solution like QuickBooks Online, for example where the software is stored in the cloud and you can also store your data there too. But the confusion intensified when Adobe introduced a second version of desktop Lightroom that is intended as more of true cloud solution. The software still installs on your desktop but the photos can be stored in the cloud. (This version is very similar to the version of LR that’s used on mobile devices. That version was previously named Lightroom Mobile. Now it’s simply named Lightroom for iOS and Android devices.)

Adobe rebranded the previous Lightroom CC as Lightroom Classic and named the new cloud-based version Lightroom. I can’t tell you how many people I’ve met who are confused by this. And it’s no wonder. The cloud-based version, Lightroom CC. Notice it doesn’t have an Identity Plate or a Module Picker. It also has Albums on the left instead of Folders.

If you subscribe to the Adobe Creative Cloud Photography plan, you are entitled to both versions of Lightroom in addition to Photoshop CC. When you download or update your desktop version of Lightroom Classic, be sure to select the version circled at the bottom of the image below. 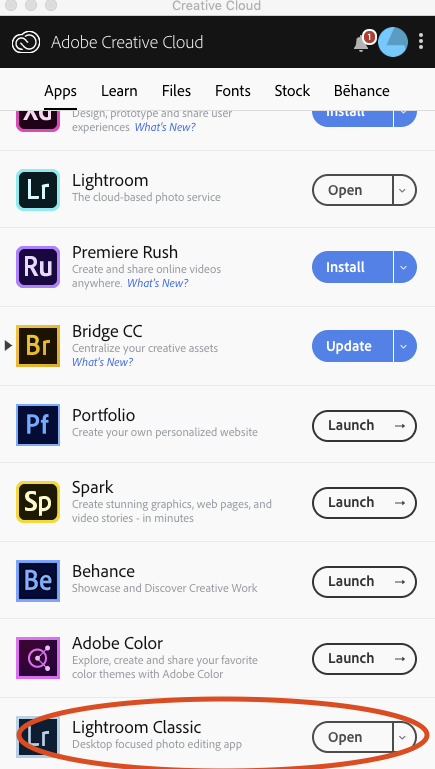